It is well known that Japanese bantams (and some other breeds) carry a lethal gene related to leg length. This article explains the genetics of this condition.

There are a number of lethal genes in poultry, however in Japanese bantams, the Creeper (Cp) gene is the offender. This is a skeletal shortening mutation which is also found in other short-legged breeds such as Scots Dumpies.

There are two main types of genetic traits, these being heterozygous and homozygous.

I will quote the experts in describing the technical stuff:

A diploid organism is heterozygous at a gene locus when its cells contain two different alleles of a gene. Heterozygous genotypes are represented by a capital letter (representing the dominant allele) and a lowercase letter (representing the recessive allele), such as "Rr" or "Ss". The capital letter is usually written first. (Molecular Cell Biology, 4th edition by Harvey Lodish, et al Chapter 8, 2000 )

A cell is said to be homozygous for a particular gene when identical alleles of the gene are present on both homologous chromosomes. The cell or organism in question is called a homozygote. True breeding organisms are always homozygous for the traits that are to be held constant. (Lawrence, Eleanor: Henderson's Dictionary of Biology, 14e, 2008 )

All Japanese bantams with proper short leg length are heterozygous, however the embryos can have one of three possible genetic combinations for leg length; two being homozygous and one heterozygous. Of these three possibilities, only two can survive to hatching. To illustrate the combinations, I shall (unscientifically) label the two alleles as thus:

So the possible combinations can be shown as follows:

Breeders of Japanese bantams all strive to breed birds with the short legs required, however they may use different strategies to get them. Some will mate short-legged birds with long-legged birds. This removes the chance of any embryos having the lethal (SS) combination and all fertile eggs will hatch. The main drawback of this strategy is that it increases the number of long-legged chicks to 50 per cent. Therefore, the incidence of "wasters" is greatly increased.

Most serious breeders however, will mate two short-legged birds together. The advantages of this strategy are: the number of correct short-legged birds is maintained at 50 per cent, and the eggs containing chicks with the lethal (SS) genes do not hatch anyway. The percentage of "wasters" is therefore reduced naturally.

A common fear among people is, that breeding with two short-legged birds will give them chicks with terrible deformities or that will die during rearing. Neither of these things happen. Not a single homozygous Cp chick ever hatches. Most of them die within the first day or two of incubation and generally appear as either infertile eggs or as early dead-in-shells. The rest die well before hatching time.

Looking at some strains of Japanese bantams, it is obvious to me that they are carrying Indian Game blood from previous crosses—presumably done to improve bone size and constitution—by their body shape, short, narrow feathering, and legs that seem to be of intermediate length, neither long nor short.

Indian Games have a different (semi-lethal) short-leg gene known as Cl and it would appear that these strains of Japanese bantams may well be carrying this gene, and not be the proper Cp gene. An example of injudicous breeding potentially wrecking a famous breed, for dubious short-term gain.

Above: A Japanese bantam with proper Cp short legs. Note, the toes are the only visible part of the legs and feet. 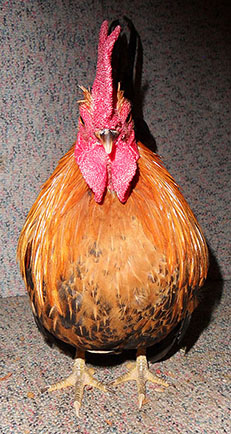 Above: A Japanese bantam with long legs. The shank is clearly visible in the long-legged birds. These two birds are full brothers from the same mating of two short-legged parents.