Would you consider the Australian Langshan as a contender for the backyard? It is an exhibition bird par excellence whether bantam or large, but as backyard layer, it's not usually the first choice. Maybe it should be.

As Good as a Hybrid

Fancier and commercial producer Neil Penny has both standard Langshans and ISAbrowns. He believes the Langshan is greatly underrated and that we should all be pushing it as a bird that is ideal for the suburban backyard.

'I'm fortunate I'm in a position to compare Langshans with commercial hybrids. It doesn't really matter if it is an ISAbrown or a Hy-Line, but at present we have ISAs. I'm sticking my neck out, but I'm prepared to say that so far the Langshan has kept up with the ISA. What's in the Langshan’s favour is that they eat one quarter less than hybrids, but the eggs are only a fraction smaller. They produce eggs with really strong shells, and the overall quality of the egg is better than the ISA's.'

'There is no comparison with temperament, Langshans totally outclass any hybrid', Neil said. 'They are friendly, placid and don't resort to vices like bullying or even feather pecking when under stress. They are simply better natured than the commercial birds.

'They look good too. Langshans are a neat bird, quite close feathered considering they are a softfeather and, of course, they have sparse leg feathering. The fact they have foot feathering is a disadvantage because regular checking is needed to ensure scaly leg mite hasn't taken hold. This is really a small price to pay for a quality utility bird', Neil said.

Great for the Kids

Back in AP, Vol 13, No 6, we consulted with numerous fanciers as to which breed they would recommend for children. Yes, Langshans were one of the select coterie. This is because the breed, and especially the bantams, are docile and easily tamed, they don't require extensive housing (though they are best run in dry conditions otherwise foot feathering gets muddy and damaged), they are economical eaters and they lay well. Suburban families can’t really afford to keep pets for children that don't provide a good share of the household eggs.

One reason this breed hasn’t been keenly sought is because backyarders often want a colourful looking bird and the Langshan is relatively plain. It is hard for a self-coloured bird to compete with Laced Wyandottes, Spangled Hamburghs and even Anconas, or more fancy fowl like Polish or Faverolles. But don't forget Blue and White varieties of Langshan can be obtained as well as the sleek Black.

It is up to breeders to push the Langshan forward because people expect a return from their hens even when they are household pets. When a breed can get a tick for temperament, hardiness, feed efficiency, minimum management demands, egg size, shell strength and production longevity, who cares if the plumage is spotted, dotted or plain? The Langshan is clearly up the top with the best breeds for backyard egg production.

In the present poultry revival many households are purchasing commercial hybrids. There is no denying that they are outstanding layers, but there are two aspects to this that are often overlooked.

The first is that birds like ISAbrowns must be fed a ration containing around 16.5% protein. If they don't receive high protein feed they feather peck or they are forced to increase their feed intake to obtain the protein needed to support egg lay. The latter scenario is common in backyards, and the result is the hens get fat and prolapse.

The other problem with hybrids is that they are bred for a relatively short period of intensive egg lay. From 18 months the shells are frequently thin, many eggs are laid without shells or the pointed ends of the eggs crumble as soon as the lid on an egg carton is closed. Production virtually ceases by the end of the second year. This presents a real problem for families that have made pets out of their hens.

Lady Langshan may not be able to keep up with the early output of an ISAbrown, but you can count on her still laying strong shelled eggs several years along. She is a stayer, not a sprinter, in horse parlance.

The one trait that might let her down is broodiness. Hybrids have had this instinct bred out and it is not strong in most of the higher laying light breeds. Langshans are not a super broody breed, but intensity will vary between strains. Provided broodies are removed from the nest speedily and placed in a suitable environment, return to lay won't be lengthy.

The next time a backyarder asks which breed to keep, include the Aussie Langshan in the line-up. There are lots of breeders around with them, they are under the umbrella of a strong club and they are a dinky di, easy-care economical layer. Who can go past that? 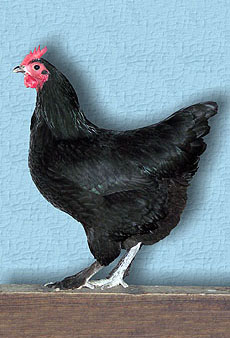 Above: A beautiful Langshan hen. 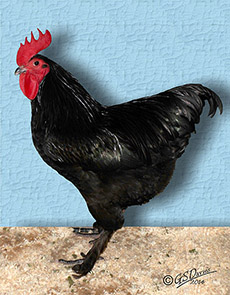 Above: A champion Langshan cockerel.